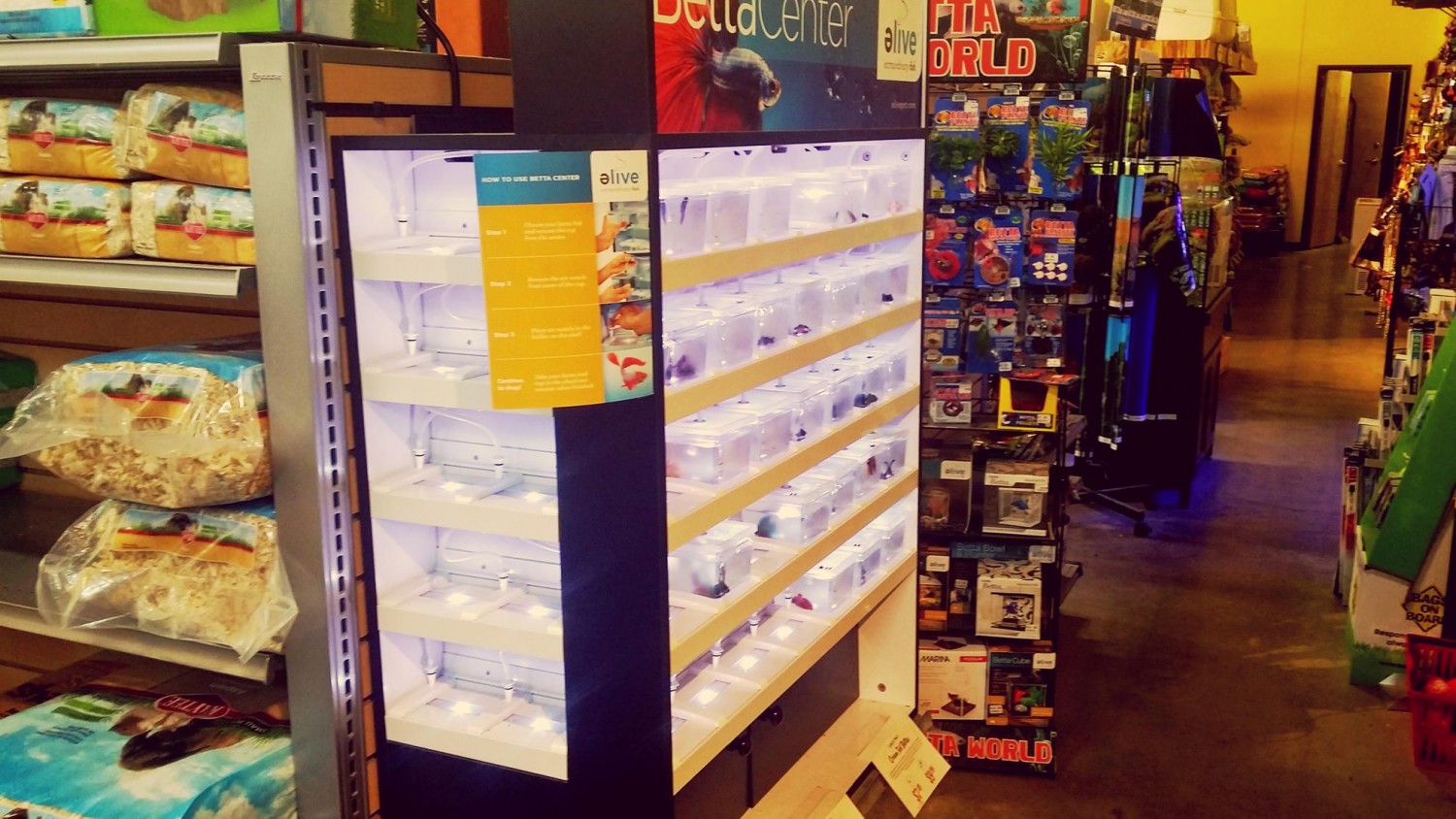 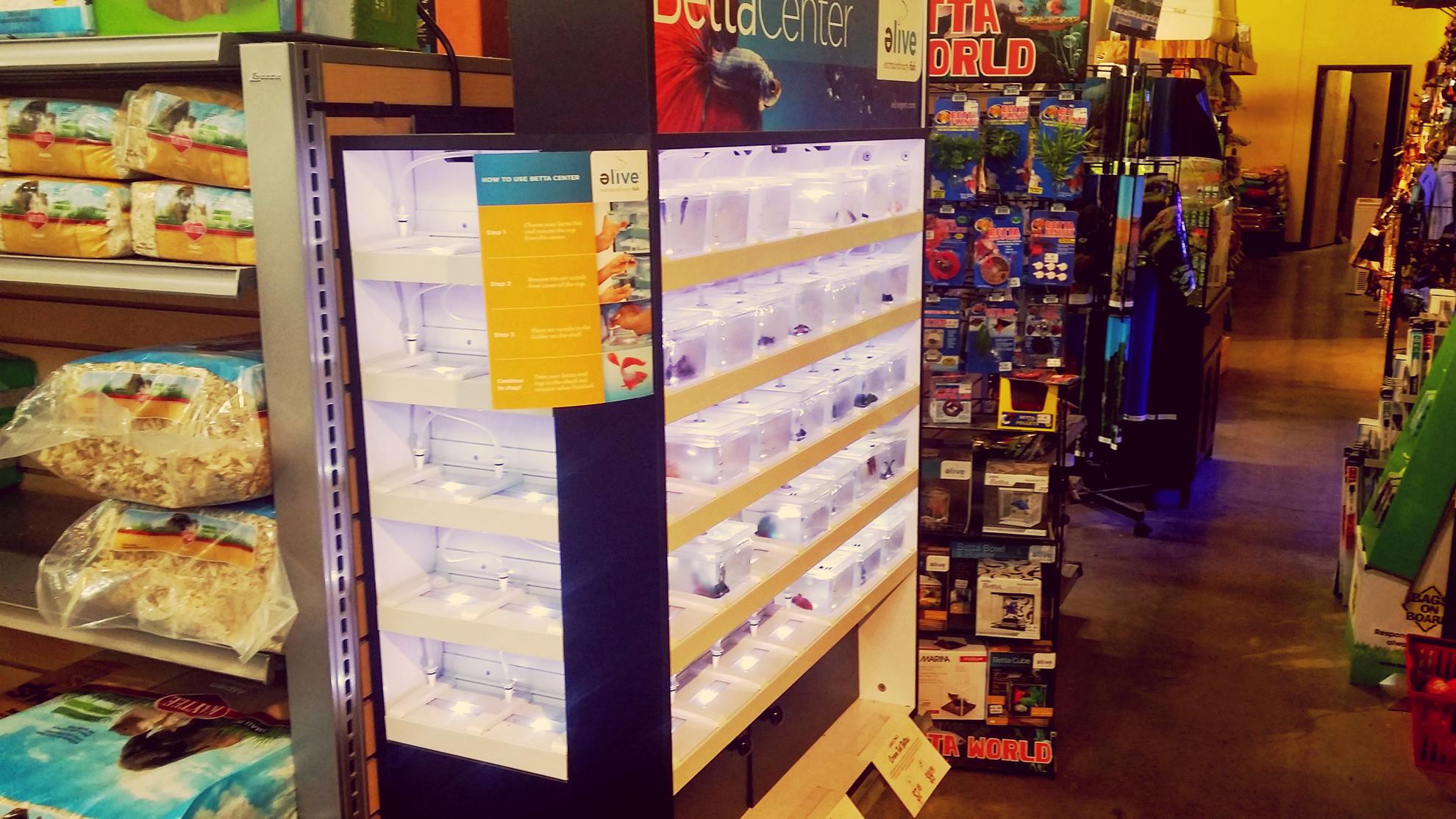 1. Completion of our Reef System to the Wilsonville store (May 2014)

After literal months of plumbing through the wee hours of the morning, we completed our 1300 gallon coral frag system.  It features automation from a Neptune Apex, eight 100 gallon+ tanks, a 300 gallon refugium, an MRC reef orca 2 skimmer, a Knop-10000 calcium reactor, and over 130 square feet of frag racks.

After a few more grueling months of plumbing we completed our 1000 gallon fish system.  It features 9 75 gallon tanks divided, automated water changes, a 300 gallon refugium, and 880 watts of UV sterilization from Tropic Marin.

We moved the fish to the front of the store so it would feel more open and prevent customers from getting lost in the back.

We scrapped the old individual tank system and moved to a central system designed to reduce labor costs and improve system stability. We’re utilizing UV sterilization and automatic water changes and automatic ph controls to keep the system dialed in.

We’ve just about phased out all our aggressive cichlids in favor of providing better variety for customers with planted tanks. This has included bolstering our show tanks with Co2 and implementing a fertilizing regime for all our tanks. In addition we brought in lots of new products for planted tank customers including dry fertilizer.

6. Added Quarantine to Both Saltwater Fish and Corals (March 2015)

We realized that there was only way right way to sell saltwater fish and it was after quarantine. This makes our fish a little more expensive, but its worth it. The quarantine system lets fish rest for a couple weeks before going on display. It allows us to observe fish for illness before we put them in our main stock tanks. It allows us to put only the strong and healthy fish that are ready for your tanks on the sales floor. It allows us to treat fish on arrival without having to keep our healthy fish in medicated tanks. In the end, its a no brainer even if it increases the cost of the fish by 15-20%.

When we re-evaluate its not just a simple process of this didn’t sell or this looks cool or someone asked about that. We do a comprehensive matrix on an entire category to determine how we can deliver maximum value to you our customers. For example in the category of lighting we looked at every LED light brand out there and gave each brand a score in different categories such as price, warranty, PAR output per dollar, average online review, feature set, etc. Then we weight the scores based on importance to our customers in order to get a weight score that represented the value of each brand and picked from there. We did this on everything from salt to additives, to fish food, to aquariums.

8. We brought back aquarium maintenance (December 2014)

In 2005 we dropped our aquarium maintenance services in favor of recommending outside contractors. However, our customers just weren’t happy with the service they were getting and we knew it was time to bring it back and do it with higher level of standard. We now service aquariums in the Newberg, Sherwood, Wilsonville area.

Who wants to buy a $100 UV sterilizer for the 2 weeks you need it to get rid of a green algae bloom? Who wants to buy a $400 Photosynthetic Active Radiation meter just to see what kind of corals you can support? More info available on our fish page.

10. We started Bringing You More Betta

We added some pretty sweet new betta units at each store that deliver air to each betta giving them an extra level of filtration in their cups. Additionally each cup is now lit allowing you to see the bettas in their full glory. We’ve also been bringing in a lot more half moons because we listened to you and learned that when you are only buying one fish whose gonna live with you for 5 years, you don’t really care about an extra $10. We don’t blame you!